The Importance of Biometric Gun Safes

The Importance of Biometric Gun Safes

With crime rate on the rise, owning a firearm doesn’t seem like a bad idea. You need to protect your life and property and also that of your family. But more importantly, being able to safe-keep the firearm. This is to prevent its reverse use and let me tell you what I mean. Sometimes ago, I witnessed the danger a gun could cause if not well stored. 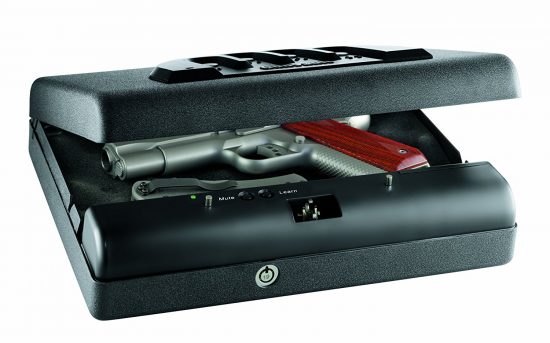 I was having dinner at a friend’s home. Then, their 4-year old daughter  had somehow got hold of an unlocked and loaded gun owned by her dad. Luckily for us, she was smartly disarmed and no one was hurt. You are probably wondering what harm a little girl could do with a gun. I’ll have you know that there have been 62 cases of children accidentally shooting themselves or someone else.

That’s just this year alone! Not to mention that, half of school shootings by minors are carried out with guns stolen from parents. Feeling distraught, I reached out to gun experts and did my research so I can help gun owners like me and you store our guns safer.

I found out that the best way to store a gun is to simply lock it up in a safe that’s secure and easily accessible. I realize that you may wonder which gun safes are the most secure and accessible and I did too. But I found the biometric gun safe to be my answer. You want to know why? Well, don’t worry, you’ll know soon enough. And for those simply interested in having a great gun safe for your handguns, I’ve reviewed those as well. First, let’s get familiar with biometrics.

What Exactly Is Biometrics?

Simply put, biometrics is the measurement and analysis of physical and behavioral features. It is mainly used for identification and authentication. You probably have used it to verify your identity at a bank or government agency or perhaps, to unlock your iPhone. There are two types of biometrics:

How Does It Work?

The process is pretty simple. A scanning device records your fingerprint or whatever trait you want to use. Then, it stores it as code or graph into a database. Finally, it compares the recorded trait with anyone placed on the sensor to grant access. As there are no two people with the same fingerprints or retinas, only yours will be a match.

How & Why Was Biometrics Developed Into Gun Safes?

Safes date back to the times of the Egyptian pyramids. Yes, they are that archaic. Following a similar process, the first gun safes were manufactured in the mid 1800’s by Silas Herring. But as you know, technological advancements make changes occur pretty fast. In the gun industry, biometric gun safes are the products of these advancements. They were developed to provide a better option to the traditional key or combination locks.

Here’s how they were developed into safes. It’s not rocket science. They are incorporated into gun safes the way they are in smartphones.

Most allow for up to 50 fingerprints to be registered. It ensures that all your fingers and that of any other person that you want to gain access is recorded. This is because a cut on one finger, or dirt, will not gain you access to the safe.Consider this as backup. Also, some require up to five prints for access, and some just one.

Obviously, it was developed to improve gun safety and restrict access to only authorized users. More specifically to reduce the hassle of using keys and combinations. Keys can get lost and you might forget a code under pressure. Biometric gun safes give you a quick access to the safe. Easy for you but impossible for someone without a fingerprint registered. This way, no little girl mistakenly comes across a loaded gun anymore.

Now let me tell you why a biometric gun safe is more and easily accessible than the regular safes.

Why Biometric Gun Safes Are Better Than Regular Safes

One thing that’s similar about all gun safes is that they are basically still a lockbox. The difference is in how they are accessed. Some use keys, combinations, or electrical mechanisms. Here’s how the biometric gun safe stands out.

Biometric gun safes also come with keys or combination pads for backup. Let’s talk more about the biometric feature. It guarantees that only you and those you grant access can get to the firearm in the gun safe. After scanning, the lock opens to only the unique fingerprints that it has in its database. Any person with the keys or pattern of combination to a traditional gun safe can gain access. Only you can use your safe. There is no cracking of fingerprints.

Ever been in a situation where you had to quickly get to your gun? Adrenaline skyrockets, and your thinking is a blur. A life and death scenario is not the best time to fondle with keys or codes to your gun safe. With a biometric gun safe, all you need is to press your finger on the scanner and the safes pops open.

There are emergency situations where stealth makes the difference rather than a rush. Biometric gun safes can be accessed in the dark without much of a noise. Whereas in traditional locks, the doors could make a “bong” sound or the “cling” of keys and give your location up. The biometric gun safes and electrical ones too, also have interior lights. Obviously, it runs on power supply. Some use AA batteries or a plugged into a power supply.

Biometric gun safes optimize cutting edge technology to ensure the safety storage of firearms from kids, drunk friends or any authorized person. Now you ask if they are expensive. Yes, they are, but consider it an investment.

Is the safety of your family too expensive to secure? That’s what I thought too. You can’t place a price tag on that. The high price covers the cost of the fingerprint scanner and electronics from running the sensor. Be that as it may, a military-graded biometric safe could cost thousands of dollars. An economical one usually costs a couple of hundred dollars on an average.

What Happens When Biometrics Fail In The Safes?

This used to be a big issue with the earlier versions of biometric safes. The new models are more sensitive and less prone to failure. This is however not impossible. The Safes can fail when:

You should regularly clean the scanner with a Q-tip or clean your hands well before use. If you work handy jobs, it is highly recommended you store all your fingerprints.

How Do You Open It When It Fails?

There are unlikely cases when the biometric scanner might fail to recognize your fingerprint – fail. These could be caused by reason already explained earlier. Does it mean the safe is locked for life? Definitely not.

Here is a review of a great biometric safe

If you are a gun owner, it is your responsibility to keep your guns safely and out of the reach of unauthorized users. This is why gun safes are very important. And more important is getting a well secured one. You know the right one already – Biometric gun safe. They come in different shapes and sizes but are mostly portable.

It is easy and fast to access and most importantly keeps the guns out of reach of children or unauthorized users.

It might be a bit expensive but the safety of your family is priceless. You shouldn’t expect the level of security an expensive gun safe would give to that of cheap over counter ones. My advice is to consider getting one that meets your required level of security. For instance, there is no need to buy a military-graded biometric gun safe just to keep firearms out of the reach of children. However, you shouldn’t ignore how crafty kids can be at times. Educate them on gun safety and conceal the gun safe out of sight.

You don’t want to be held responsible in the event of someone using your firearm for an attack, do you? Consider locking up your guns in a biometric safe then.