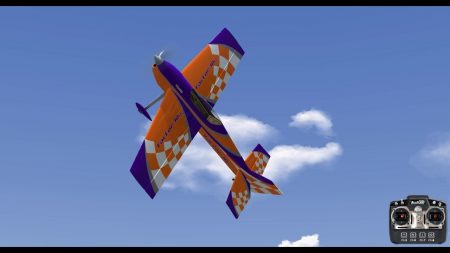 Flight simulators are often a neglected type of games due to its difficulty and lack of story and campaign.

We can pretty much say that flight simulators have their own group of people who love them and play them on daily basis.

If you are one of them, you’ll be happy to hear about the Great Planes – RF8 Flight Simulator. Great Planes is a company known for their wide array of high-performance RC planes, so you might already be familiar with this developer.

If you like the blue skies and sense of speed, you are going to be very happy with this game. Real Flight 8 is here to take you on an epic journey as you launch yourself into the sky and sail off into the distance.

You can now experience the true flight simulation in the best possible way by flying and customizing your aircraft. I know you’re jumping around your room in excitement, so let’s review the RF8 Flight Sim right now!

Great Planes RF8 Flight Simulator can be bought in two versions- the software only and the software with a controlled. You know me and you know that I’m not a fan of incomplete products, so I got this more expensive ($179.99) version. With the Interlink-X Controller, I was glad I could start playing this immersive game out of the box and the price isn’t all that bad, although it could be a tad lower.

The installation of this game is simple, letting you getting hold of your favorite aircraft in just a few minutes. I was quite surprised to see how good the world looks in this game, even though I was immediately dumped on the runway.

I didn’t notice that I’ve been holding my throttle button so yes… I was in the skies in just a few seconds. The controls in this game are pretty darn good! I was able to do some acrobatics, pirouettes and even fly reverse with my beginner plane.

I quite like this approach where you are thrown into the action right from the start and get the tutorials during the flight. You’ll quickly get used to it, especially with the Interlink-X Controller, which is very comfortable to hold, even though I have very small hands.

On the graphical side, the game looks… well, average at best. Sure, there are some high-res textures on the aircraft, but the viewing distance is the plague of this game. For example, some mountains and trees aren’t visible until you get relatively close, and I’m playing on the highest settings with my GTX 970.

To make things better, the sound design is DOPE. If you like that orgasmic sound of aircraft buzzing through the thick skies, you’ll have an EARgasm of your life! And if you can’t handle the realistic physics of this game, you’ll be glad to tweak some settings and make this game more accessible to you.  In fact, everything in this game is customizable and adds to a replayability value.

As a complex, yet simple-to-play flight simulation game, RF8 has some great features that come with it. Our review simply won’t be complete and thorough without mentioning the amazing features of this game.

These are the most important features of RF8 Flight Simulator:

More than 140 Aircraft to Choose From- You’ll never run out of ideas in this game. Feel free to choose from more than 140 aircraft and thrust yourself deep in the blue skies. You can now fly both airplanes and helicopters, resulting in a game with a long lifespan.

Multiple Scenarios and Environments- A flight simulation game wouldn’t be complete without different scenarios and environments. Thankfully, RF8 Flight Simulator comes with more than 40 different flying sites which you can overlook from the cockpit of your plane. Get ready to feel like a true pilot!

Simple Controls with NO Learning Curve- Who said that the game like this must be complicated? No, it doesn’t have to be! Instead, you can start flying out of the box and learn from the tutorials given on the fly. I think there isn’t a better way to learn how to fly.

Interlink-X Controller- This controller is so badass that you’ll probably sleep next to it and kick your wife out of the bed. It’s a 10-channel controller for controlling your aircraft that’s simply irreplaceable. Take your flying to a completely new level!

An Immersive Multiplayer- A multiplayer in a flight simulation game? Hell yeah! RF8 Flight Simulator is here to give you a multiplayer experience of your life! If you think you have what it takes, you can challenge the best pilots in the world and start building a reputation for yourself.

Before we dive any further into our conclusion if you’d like to see more sims compared… you can start learning here. Great Planes did an amazing job of making this flight simulation the way it is. RF8 Flight Simulator is here to bring you a worthy experience in flying both ordinary and RC aircraft. For true aircraft fans, this game is one of the best in this price range.

Not to mention that you can get it with a transmitter for a total price of $179.99. Sure, this price isn’t exactly the lowest we’ve seen, but you get what you pay for. On the other side, we’ve seen much better-looking games for this price and it’s really a shame that visuals couldn’t be slightly better.

If you wish to find out more about other RC flight simulators, you can do that here, on our website. We also have a complete guide that’ll help you explore the other options and compare them with each other.

Comparison of Electric vs Gas Powered RC Planes – Which Option is Better?