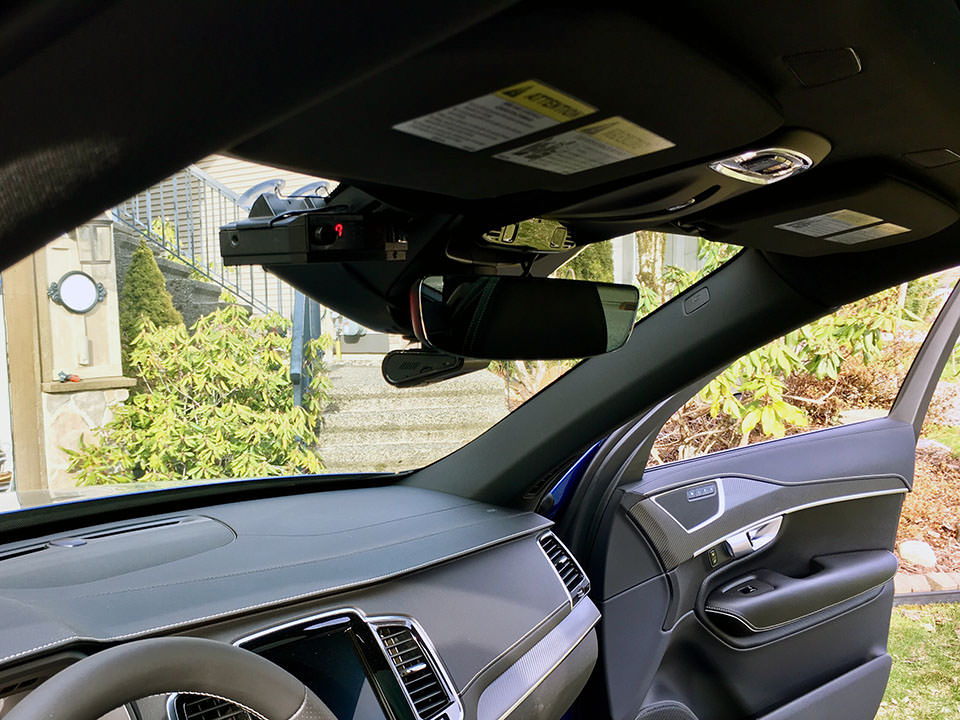 So in this day and age, the most common way of powering-up a radar detector is to simply plug it in and be on your way.

HOWEVER, there’s a few problems that come up especially if you mostly use it in one automobile. Being mounted directly in the center of the windshield (more or less) makes it prone to being a visual impairment, makes it very obvious to everyone that you have one… and may even result in a ticket, especially in states which take it seriously of anything that is mounted on your windshield.

To solve this, you simply need to hardwire your device to a power source which turns on and off with the vehicle’s ignition switch. In this post, I’ll be explaining step by step on how this can be done.

Before you get started, it’s important to know which tools and accessories you’ll need to complete this job. Remember most of these things can be found online or at a local store such as Walmart. Heck, some of these things you’ll even be able to find at your home, so lets dive into this list!

CRIMPING PLIERS – You’ll need a set of comping pliers (ideally wire cutting and splicing pliers). This is where you’ll need to cut some things, as well as splice wires. Removing stubborn fuses becomes much easier with tool also. Instead of regular pliers which have a flat nose when you crimp, does not make a strong connection.

Crimping pliers are meant for PERFECT crimping of wires. 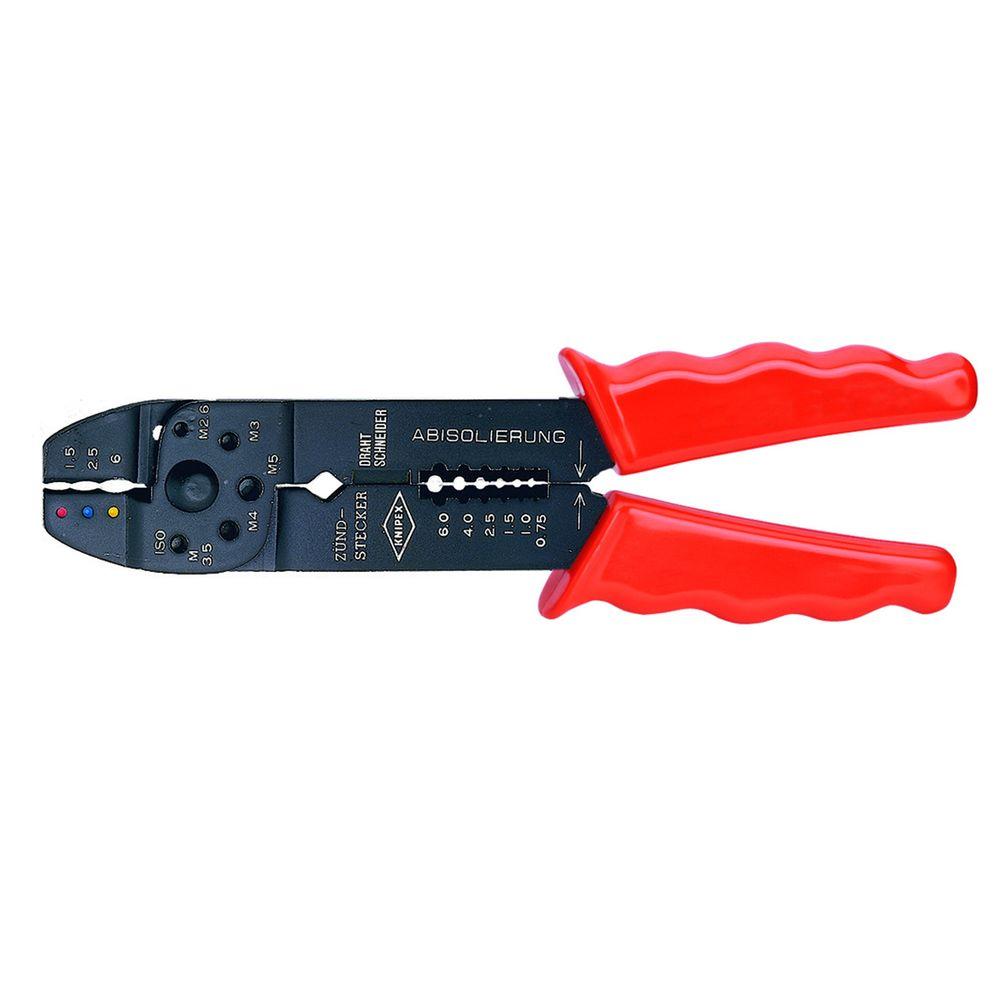 HARDWIRE CABLE – This is where you’ll most likely need to either visit Amazon to find a compatible kit, or visit the manufacturers website to see which one THEY sell. This can run anywhere between $15-$40 dollars depending on what kind of features the hardwire actually has.

Believe it or not, you can get a kit which includes bluetooth, led alert lights, on/off switch built-in and much more. This of course is something that only certain manufacturers can provide (like Escort for instance). 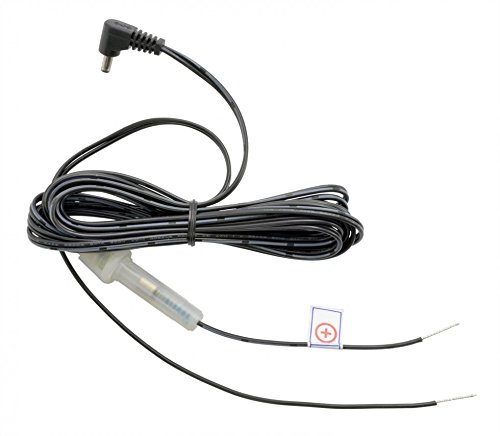 ADD-A-CIRCUIT FUSE TAP – Now this is where the magic comes into play, an “add-a-circuit fuse tap” lets you tap into an existing fuse which turns on and off with your vehicles ignition switch.

A fuse from something like the radio or the cigarette lighter will enable you to have your detector turn on and off as you get in and out of your vehicle… without ever draining your battery dry. 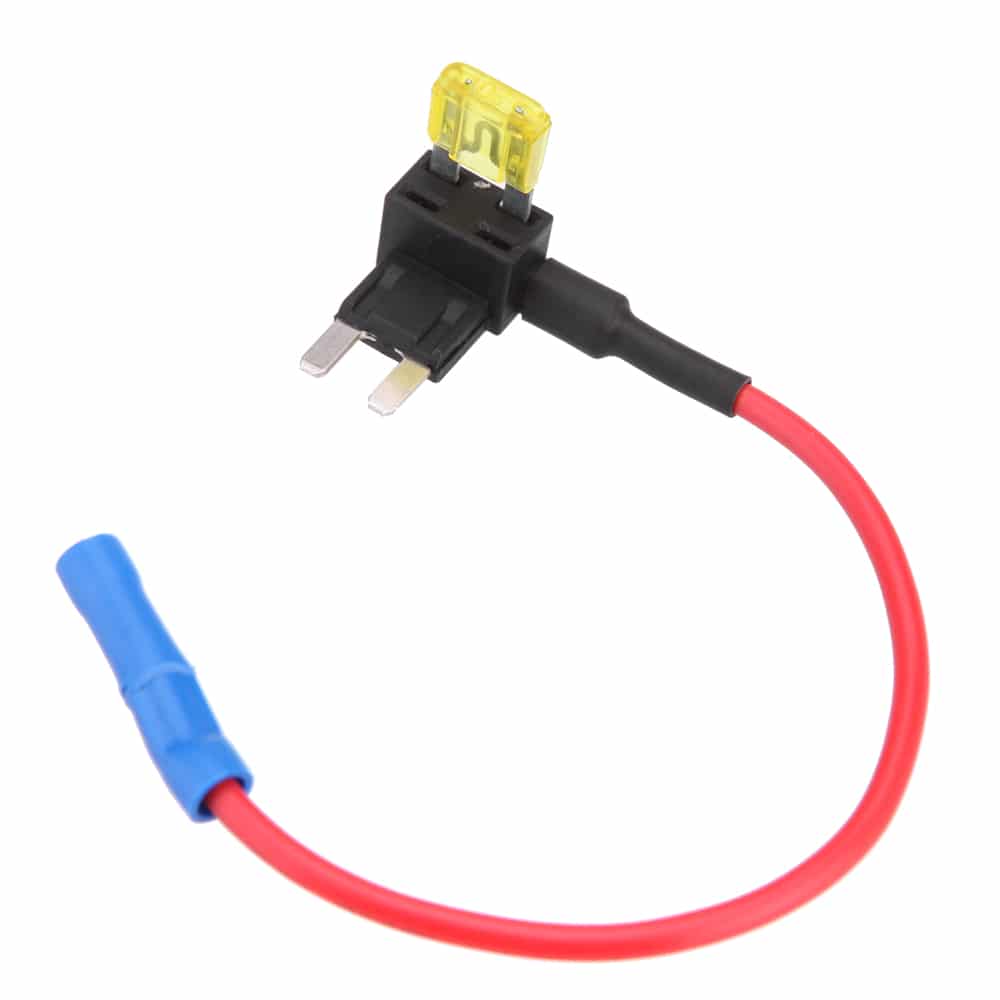 Typically when you buy one of these fuse tap’s, you’ll receive extra fuses which match the connector. If you’re wondering, with this accessory you’ll still be running a fuse that was there before, it will just add an extra function with a power wire sticking out that you’ll be running to your detector.

T-TAP (optional) – This accessory is really just an optional thing that you don’t necessarily have to have. The way it works is, it uses a metal crimp to bite down on a wire (in this case the add-a-circuit fuse tap) and get a solid connection.

Using the t-tap’s open end, you would crimp down to a power wire to get a solid connection. 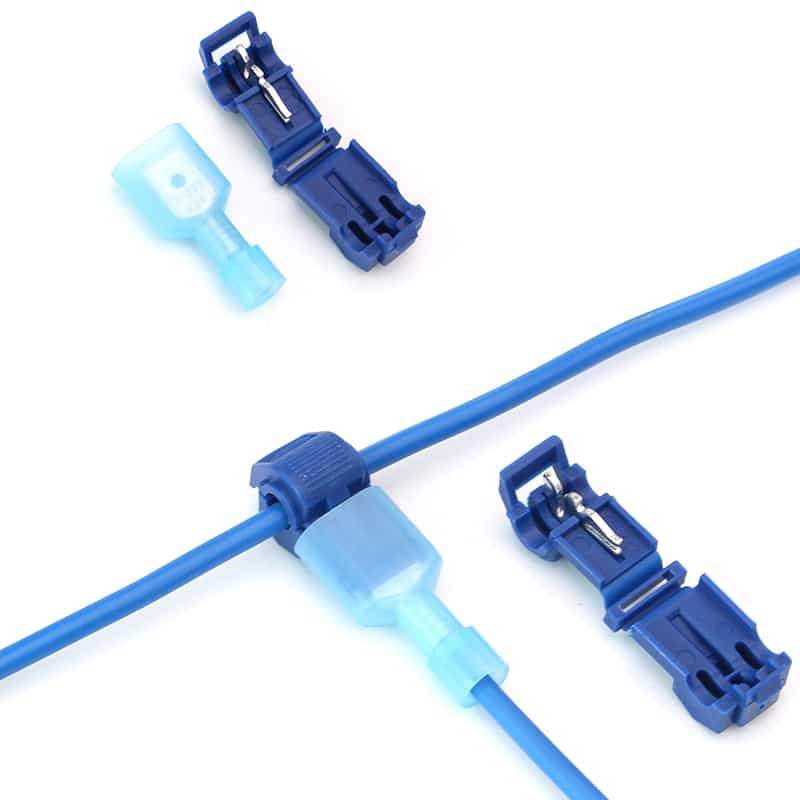 Let’s dive into how each thing is done step by step, this all can be done in less an hour so lets go!Step #1 Find the interior fuse box you’ll be tapping into. Typically you’ll find it beneath your vehicles steering wheel either by the hood-latch OR, right below the steering wheel adjusting latch. If you have trouble, use google and type in this query “year make model interior fuse box”, which you’ll replace with something like (this is an example) “2010 Toyota Prius Interior Fuse Box” or whatever your automobile is. When you find it, it should be something like this: 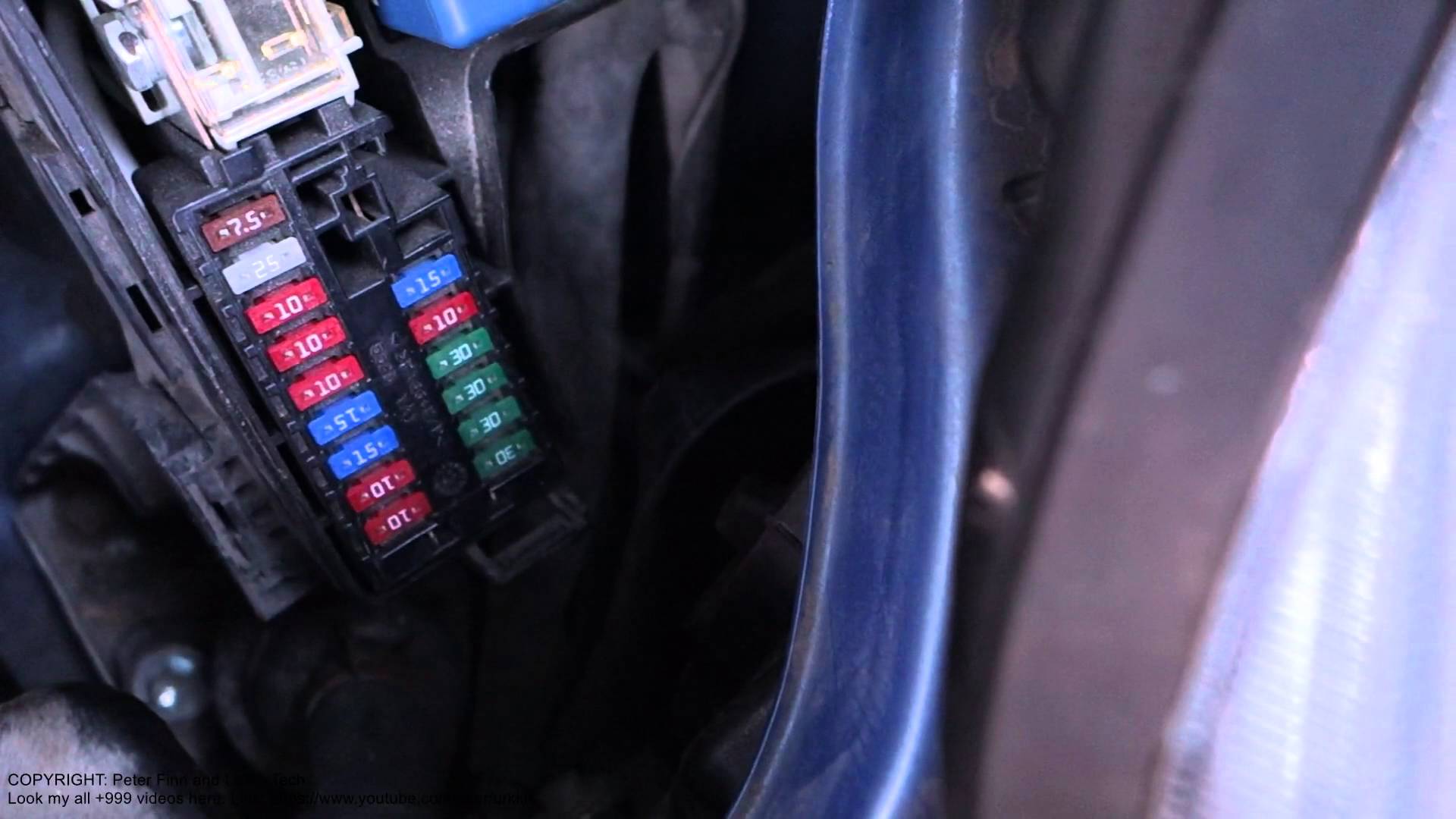 It should look something like this, with numbered fuses representing the AMP rating on each.

Now after you found it, it is time to find out which fuse to tap into. The most obvious ones to tap into would be your radio. To find out exactly which fuse is for your radio, you can either look at the LID of the fuse box which you likely had to take off in order to see the fuse panel, check the owners manual, or just google it using a similar query I mentioned above and look under Google Images. Once you find it, it’s time for the next step. 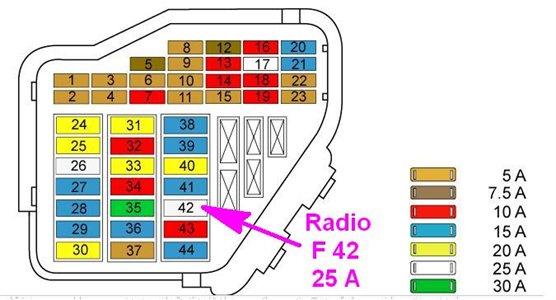 Looking in google or your owners manual, this is how you’d find the radio fuse box.

You’ll need to figure out how many amps it takes for your detector to run, if for example its 500mA or 1A total, a 2A fuse will be just fine. Make sure to place the new fuse on the top in the “extra” slot (check image below to see what I mean). 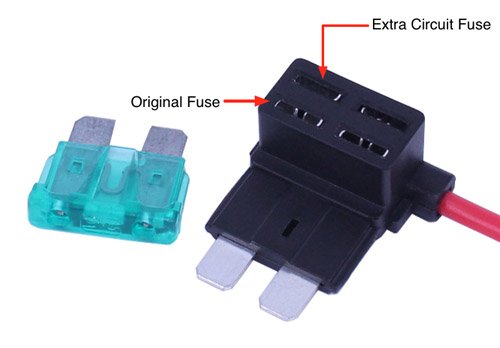 Top fuse slot is for your detector & bottom slot is for the original fuse, ensure you are using appropriate fuses for the job.

Step #3 Connect the power wire to the fuse-tap. This part is pretty straightforward, since the fuse-tap has an open end which lets you connect any wire to it, what you’ll need to do is take the hardwire kit positive cable and strip the end so it can be connected together with the fuse-tap cable. Most fuse-taps have a blue crimp connector which lets you successfully connect both ends (check image below to see). 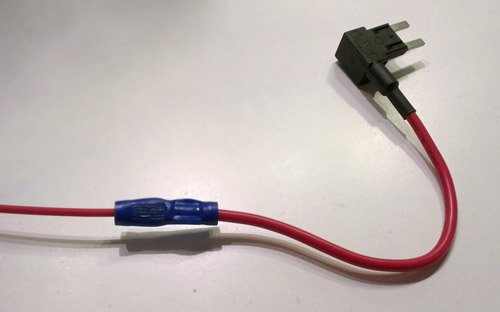 Connecting the power wire to the fuse tap wire.

NOTE: The other method was using the T-TAP which splices into the wire insulation of the fuse-tap cable. The other end of the T-TAP simply crimps down on the hardwire kit power cable (check images below to see). 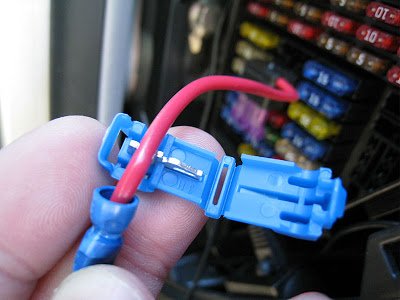 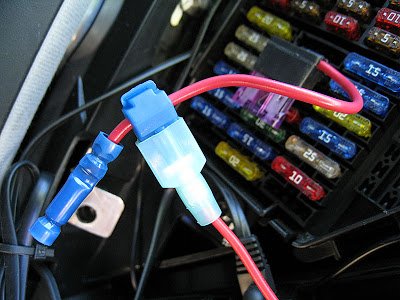 Step #4 Connecting the ground wire. Now this part is even easier since all you need to do, is find some solid metal part which you can connect the negative terminal of your hardwire kit. This can be a metal frame section of your automobile, some metal bolt, or whatever else you find closest. The KEY part is, it has to be running directly into the frame of your vehicle. Have a look at the image below, you’ll understand exactly how this would look like.NOTE: The most common source of ground, is a metal bolt which runs to your vehicles frame. 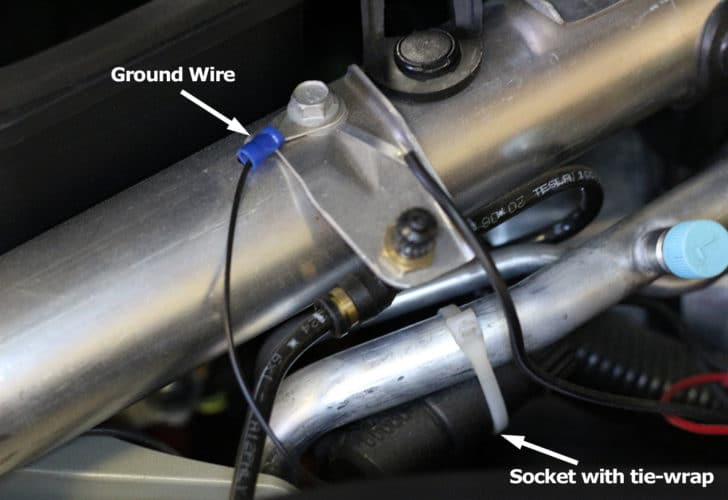 Step #5 Running the Wires. This part can be a bit of a pain, but when done properly, it will look very natural and blend in with the background of your automobile. You’ll want to run all wires both positive and negative from your fuse box, up your A-pillar, across your headliner, and into your radar detector. Once its all said and done, its a matter of plugging in your electronic device and letting it run there from now on. 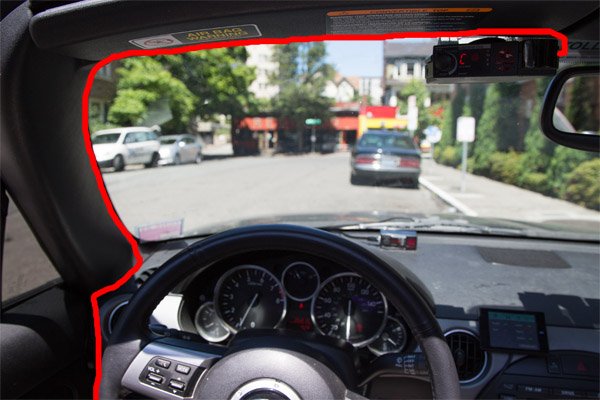 Where you will run your positive and negative wires. Image source VortexRadar YouTube.

Let’s summarize what we’ve talked about. We connected the hardwire kit directly into the fuse box and a ground on your vehicle which is conveniently located near your fuse box. We ran the wire directly though your vehicles trim near the A-pillar and connected the radar detector. That’s it!You are now flying under the radar (no pun intended), no one will even suspect you have something, and if you’re running a radar detector in Virginia… hardwiring and placing it right at the top of the windshield is the PERFECT place to keep police from bugging you.

What if my automobile has NO fuses which turn off.. what if they are always on?ANSWER: This can be an issue, especially in todays automobiles which are more technologically advanced every year. What you’d do in this instance, is either have a hardwire kit which has a manual on/off switch, or you get a radar detector which automatically turns off when it senses via GPS that you have not moved much in a while. The detector is all hooked up, but it’s still not getting power. What now?ANSWER:  What you’ll first need to do is check that the fuse-tap is plugged in all the way, then check to see if the fuses you installed in both ends of the fuse tap are okay. You then need to check if the connection between the fuse tap and hardwire positive cable is solid. Followed by you’ll need to check for a secure ground connection. If none of those things are solving the issue, you may need to replace the hardwire cable. I need help getting my trim apart to hide the wire, are there tools I can use that won’t damage my car?ANSWER:  Yes, you can actually buy a trim removal kit on Amazon for less than 20 dollars and these tools are made of a tough plastic which won’t damage the leather, hard plastics, and or cloth materials which they be made of. This is the safest bet and the set can always be reusable.

Radar Detector Laws – What YOU Need to Know